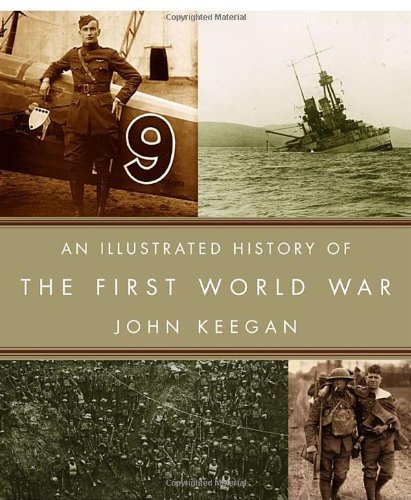 AN ILLUSTRATED HISTORY OF THE FIRST WORLD WAR

The text of this work is essentially a stripped-down version of Keegan's 1999 , with the text complemented by superb visuals. Keegan has selected almost 500 photographs, posters, drawings and maps, a cross-section of material produced by all the major combatants and clarified by Keegan's extensive captions. Focusing heavily on the ordinary men and women who bore the main burdens, the illustrations combine to show the conflict's face from the front lines to the home fronts, bringing immediacy to events and experiences increasingly remote. Those who haven't already read the earlier work will also appreciate Keegan's ability to move easily from the infantrymen's trenches to the generals' headquarters and diplomats' chambers. He discusses tactics and technology, politics and diplomacy, with intellectual flair and in prose whose elegance reflects his backgrounds as journalist and scholar. Like an increasing number of historians, Keegan regards the Great War, with its unprecedented levels of slaughter, as the defining event of the 20th century. (He believes WWII, the later, larger conflict, can only be understood in terms of the issues unresolved and created between 1914 and 1918.) That Europe's people and leaders risked everything in a war whose causes in no way justified its costs remains for Keegan easier to describe than to explain. His narrative of the conflict's sorrow and its pity is, however, as good an introduction for general readers as is to be found in print anywhere. And the high-quality illustrations should tempt even owners of the original to add this to their libraries.