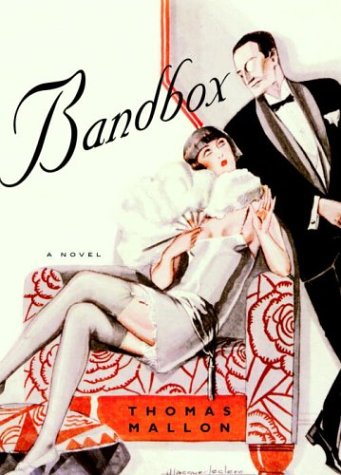 A new, gleeful exuberance infuses Mallon's latest novel, in which he turns his talent for fastidious historical detail ( , etc.) to the elaboration of a comedy of errors set in Manhattan during the 1920s. is the name of a successful monthly magazine for men, the first and best of its kind until the recent defection of its star editor, Jimmy Gordon, to establish the rival . The narrative centers on the cutthroat competition between the two magazines, a suspenseful battle in which two editors secretly defect to the other magazine, providing inside information that allows Jimmy to scoop his old boss and win the ratings game. The narrative is a tad slow getting started, since Mallon must introduce each name on the masthead and succinctly describe their various duties. All his characters are colorful and fully dimensional, however, especially 's aging editor-in-chief, Jehoshaphat (variously Joe, or Phat) Harris, who seems closely modeled on the legendary Harold Ross of the . In addition to the magazine staff, there's a Hollywood star chosen to be the subject of a cover story. She's a foul-mouthed nymphomaniac called Rosemary La Roche, who trails chaos in her wake. Mallon adroitly establishes the atmosphere of the Jazz Age, dropping such names as Al Jolson, Leopold and Loeb, President Coolidge, George M. Cohan and the crime boss Arnold Rothstein. The latter is a pivotal character, because when his goons kidnap a kid from Indiana who has come to New York because he idolizes , the plot acquires the elements of a thriller. Prohibition, police corruption, a court trial, in-house intrigue, the narcotics trade, animal rights, two gentle romances and several surprise revelations propel the plot, not to mention one of the best features—Mallon's ability to convey the deadline-obsessed mentality of a monthly magazine. Mallon has never before employed his wit and humor to such good effect; he writes with comic brio, indulging in clever repartee and nimble farce. To quote the closing sentence: "What do we do for an encore?"