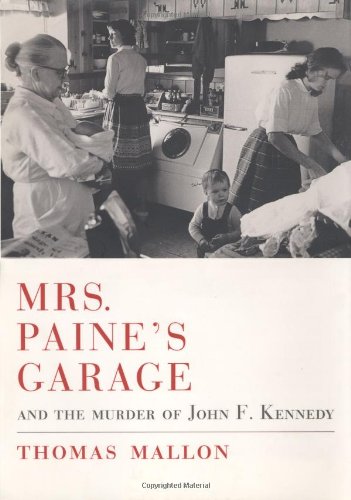 MRS. PAINE'S GARAGE: And the Murder of John F. Kennedy

In his fiction, Mallon ( etc.) has looked at history's accidental tourists, ordinary citizens thrust by happenstance into the swirl of cataclysmic events. This time around, he turns a journalistic eye toward a central surviving figure in the Kennedy assassination. In 1963, Ruth Paine, now in her late 60s, was a recently separated housewife hoping to improve her Russian. As a result, she offered to shelter a Russian woman, Marina Oswald, her children while her husband, Lee Harvey, sought work. In the end, Paine, a committed Quaker, unwittingly provided Oswald a sniper's nest—she helped him find employment at the Texas School Book Depository—and storage space, her garage, for arguably the 20th-century's most infamous murder weapon. The views on her association with the Oswalds have run the gamut, from naïve do-gooder to CIA conspirator. Here we meet up with some old faces, seen now through Paine's eyes, such as Jim Garrison, the overzealous New Orleans district attorney determined to uncover a conspiracy. Mallon follows the strange trajectory of Paine's well-intentioned life, from her first meeting with the Oswalds to her voluminous testimony before the Warren Commission to her pursuit of an estranged Marina following the events. Mallon also generates a variety of delicious "what-if" scenarios and "small-world" coincidences. There are a few brambles to hack through at the outset, awkward chronological zigzags and family histories that are tedious in spots. But these patches are soon smoothed out. While not a heavy-hitting historical tome, this may introduce some fresh air on the vast storehouse of Kennedy works. Ruth Paine's is ultimately a human story, the tale of one woman living in America.