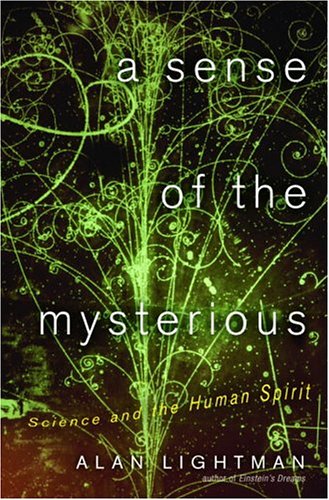 A SENSE OF THE MYSTERIOUS: Science and the Human Spirit

Not unlike its author, this collection is difficult to categorize. Lightman, a physicist and author of four acclaimed novels ( was a National Book Award finalist) as well as several books on science, offers essays (some recent, some dating back as far as 1984) that are neither scientifically substantial nor intellectually lightweight, all touching in one sense or another on the human dimensions of science—the passion it inspires, the use of mathematical abstraction in granting us the ability to grasp the material world, the wonder of Einstein's "sense of otherness... even alienation." He seems to be thinking out loud. The pieces oddly mix personal observation with narrative biography and evolve out of jazzlike riffs on a given topic. Whether the topic is the life of a prominent scientist (like Albert Einstein, Edward Teller or Richard Feynman) or the role of metaphor in science, each essay circles around its subject. The book's value lies in Lightman's perspective rather than in his handling of concrete information; musing on the difficulties of reaching the age of 35 (in a profession where one is then past one's prime) are far more intriguing and far more revealing than when attempting to draw something new out of the oft-told biographies of Nobel Prize winners like Einstein or Feynman.