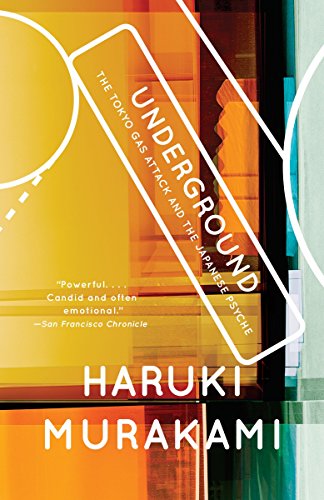 UNDERGROUND: The Tokyo Gas Attack and the Japanese Psyche

On March 20, 1995, followers of the religious cult Aum Shinrikyo unleashed lethal sarin gas into cars of the Tokyo subway system. Many died, many more were injured. This is acclaimed Japanese novelist Murakami's ( etc.) nonfiction account of this episode. It is riveting. What he mostly does here, however, is listen to and record, in separate sections, the words of both victims, people who "just happened to be gassed on the way to work," and attackers. The victims are ordinary people—bankers, businessmen, office workers, subway workers—who reflect upon what happened to them, how they reacted at the time and how they have lived since. Some continue to suffer great physical disabilities, nearly all still suffer great psychic trauma. There is a like quality to some of the tales, as victims recount the same episodes in slightly different variations. Cumulatively, their tales fascinate, as small details weave together to create a complex narrative. The attackers are of less interest, for what they say is often similar, and most remain, or at least do not regret having been, members of Aum. As with the work of Studs Terkel, which Murakami acknowledges is a model for this present work, the author's voice, outside of a few prefatory comments, is seldom heard. He offers no grand explanation, no existential answer to what happened, and the book is better for it. This is, then, a compelling tale of how capriciously and easily tragedy can destroy the ordinary, and how we try to make sense of it all.