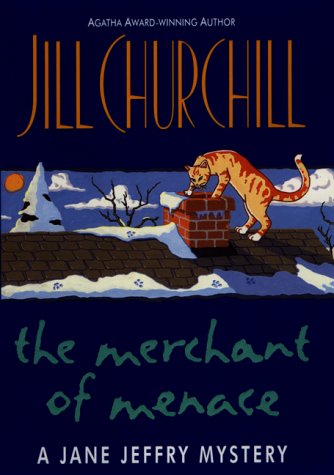 The Merchant of Menace

It's the Yuletide season, and widowed Jane Jeffry has her hands full in this 10th installment of the punningly titled series (Fear of Frying, 1997). Not only is Jane hosting two neighborhood parties, but she will meet the mother of her significant other, police detective Mel, for the first time. Adding to the holiday confusion, the Johnsons move in next door and go overboard lighting up their entire house with garish Christmas decorations. Trying to be helpful, one of Jane's friends invites intrusive and often inaccurate TV reporter Lance King to Jane's caroling party. Appalled, Jane makes the woman rescind the invitation--but to no avail as Lance shows up anyway, intimating that he has a shocking disclosure to make about one of Jane's neighbors. Before he can spill the beans, however, Lance is pushed to his death from the Johnsons roof. Jane and her best friend, Shelley, much to Mel's dismay, decide to find out who had a secret so dire that they'd murder Lance to keep it quiet. The friends unearth a slew of suspects, and all the while, Jane dodges the potential disasters associated with hosting holiday events and entertaining a potential mother-in-law while keeping track of her own three children. In the end, levelheaded, redoubtable Jane weathers the storms, identifies the killer and manages to have a happy holiday season as well. This is standard, lighthearted caper fare from the able--and very popular--Churchill. Agent, Faith Childs. (Nov.)
close
Details