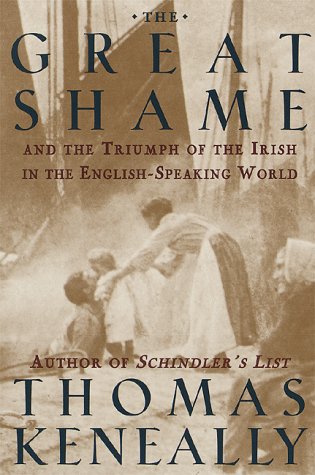 The Great Shame: And the Triumph of the Irish in the English-Speaking World

Keneally prefaced his Booker Prize-winning Schindler's List by noting that he had chosen to tell the true story of Oskar Schindler in novel form partially because ""the novelist's craft is the only one which I can lay claim to."" In the years between the publication of that novel and this remarkable new book, it appears that Keneally has banished any lingering uncertainty about venturing into nonfiction. But he hasn't left his novelist's craft behind. Combining a facility for storytelling with painstaking research, he has produced a lively, narrative history that is a model of the form. His subject is the plight of the Irish from the 19th century into the early 20th, and the experience of the Irish diaspora in the far corners of the world. In the 19th century, while Europe saw the emergence of a number of independent states, Ireland remained under the thumb of the British crown. By the end of the century, famine and emigration had reduced its population to little more than half of the 1841 total. Keneally enters this history by looking at his Australian homeland and tracing the history of his own family's Irish ancestry. Beginning with a poor farmer named Hugh Larkin (from whom Keneally's wife is descended) who was ""transported"" from Ireland in the 1830s for a vaguely political show of discontent toward his landlord, Keneally quickly sets the sociopolitical stage. Book I of The Great Shame follows the experience of Larkin (and through him, thousands of others like him) as a convict who ultimately earned his freedom and the opportunity to build a new life in a new land. Keneally simultaneously chronicles the rise and fall of Young Ireland, a group of elite, younger Irish statesmen who pushed for a more aggressive approach to independence than did Daniel O'Connell, who led the fight for Catholic Emancipation in Great Britain and Ireland. Among the ranks of Young Ireland were inflammatory writer and editor John Mitchel and future American Civil War hero Thomas Francis Meagher. Book II follows Meagher to the U.S., where he commanded the Union's famed Irish Brigade and introduced a new group of Irish insurrectionists, the Fenians, among whose number was one John Keneally, the author's ancestor. Keneally suggests several reasons for the ""shame"" of the title: failure, survival, injustice. But in capturing the resilient spirit of his subjects, and rendering their story with such a true and stirring touch, his book is a triumph, an invigorating, sprawling history of a people who flourished, as Irish, outside of Ireland. History Book Club main selection; author tour. (Sept.)
close
Details