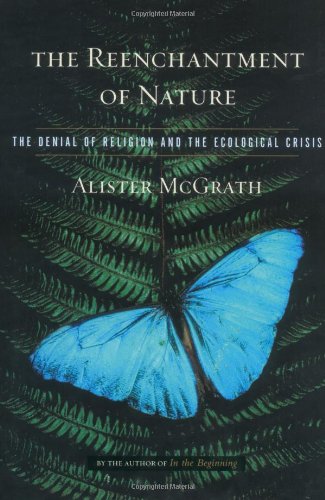 THE REENCHANTMENT OF NATURE: The Denial of Religion and the Ecological Crisis

McGrath, professor of historical theology at Oxford and prolific author (this is his 15th title since early 2001, and another is due in October) could easily write a fine book on religion and ecology if he'd slow down long enough to eliminate repetition and to organize his material so that its content supports his stated theme. There is much to like in this apologia: its nonsectarian Christian viewpoint, the author's dual passion (he has Oxford doctorates in molecular biophysics and in theology) and his use of analogy and poetry to illustrate his points. Alas, McGrath does not focus. Although he announces that the book "is intended to bring out the strategic resources of the Christian faith for the environmental struggle" and says in the final chapter that its basic theme "suggests that we reclaim the idea of nature as God's creation and act accordingly," most chapters are neither motivational nor practical but defensive. Taking frequent shots at science writers and religion despisers Lynn White and Richard Dawkins, McGrath argues that historically it is not Christianity but prosaic, reductionistic godlessness that has led to the destruction, domination and exploitation of nature. Christians, unlike disenchanted heirs of the Enlightenment, value nature as God's creation and as a source of divine revelation, and this Christian worldview, he contends, is as intellectually respectable as any scientific theory. While Christian apologists and graduate students will find value in this scientist-cum-theologian's perspective, McGrath's material could have been more effectively presented in one well-crafted magazine article.