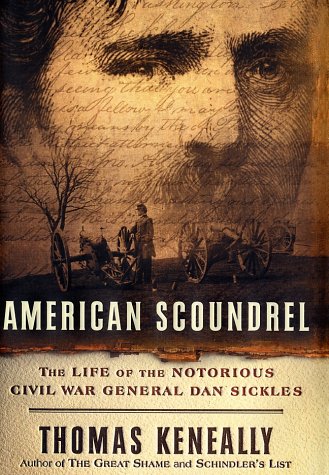 Obviously intrigued by a minor character in his previous nonfiction title, , Keneally has written a largely fascinating biography of Tammany politician and Civil War general Dan Sickles. Sickles was famous in his time both as the cold-blooded killer of his wife's lover, the son of Francis Scott Key, and as the insubordinate commander who defied orders at Cemetery Ridge, instigating a still-raging debate among military scholars about whether his regiment's actions "won or nearly lost the war." The book's apt title suggests its major drawback: Sickles's mercurial charm and courage in battle notwithstanding, his flaws as a flagrant adulterer and a mendacious and neglectful husband and father make him a difficult subject; evidence of his violent temper and ill-disguised egotism further alienate the reader's interest. By his own admission, Keneally's sympathies lie with Sickles's wife, Teresa, whose temptation into adultery with federal district attorney Philip Barton Key was a direct result of her congressman husband's neglect. Her life was ruined by the scandal, whereas Sickles was acquitted of murder and remains a lionized figure. With the Clinton sex scandals in recent memory, it's ironic to read of the marital morality of the mid-19th century, and how a relatively short time ago, the double standard regarding the position of women and the obsession with personal honor could condone murder. Once past the dramatic events of Sickles's revenge and court trial, the narrative loses its momentum. In order to describe Sickles's further career in the military, Keneally is forced to condense and summarize Civil War history. The bifurcated narrative retains its intrinsic interest, however, since Keneally's sure grasp of the political, social and historical details defines an era, and the panache of his prose, even if it sometimes veers into sentimental excess in describing Teresa's plight, remains as seductive as ever.