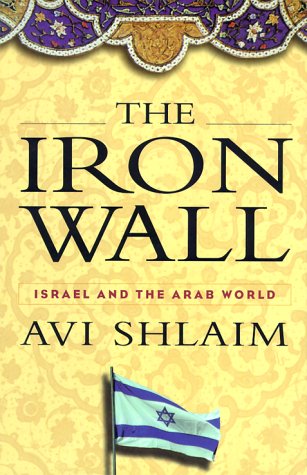 The Iron Wall: Israel and the Arab World

Optimism about the prospects for a Middle East peace agreement has accompanied the recent election of Ehud Barak as Israel's prime minister, but if this book is any indication, the war over Israel's history is likely to rage on. Shlaim (War and Peace in the Middle East, etc.) is a leader among revisionist historians who are challenging Israel's most cherished myths about itself: that it has been a peaceful nation forced into war by bellicose Arab neighbors incapable of accepting its existence. A professor of history at Oxford, he covers relations between Israel and the Arabs from Israel's 1948 War of Independence to Prime Minister Benjamin Netanyahu's electoral defeat this past May. Rarely have as many fresh details been presented together about Israel's inner political scene and the Jewish state's contacts with the Arab world in its early years. Shlaim ably sets out the belief, shared by Israeli leaders of all political stripes, that the country had to build up an ""iron wall"" of strength and security in order to bring Arab leaders to the negotiating table (Shlaim himself thinks the iron wall was a mistake). But Shlaim's revisionist enthusiasm too often gets the better of him: he fails to marshal the necessary evidence to support his contention that Arab rulers were ""prepared to recognize Israel, to negotiate directly with it, and even to make peace with it."" Shlaim's explanations of Arab political constraints, especially the pragmatism of Arab rulers relative to the extreme anti-Israel sentiment of the Arab street, is illuminating. But his view of Palestinian terrorism as a reaction to Israeli militarism is far too simplistic. Revisionism is one thing, but Shlaim employs a double standard: while he tends to view Israeli leaders, most notably Israel's first prime minister, David Ben-Gurion, as villains, he heaps praise on the ""realism"" of Arab leaders. A comprehensive, balanced history of Israel's history with its Arab neighbors needs to be written, but this is not it. Photos not seen by PW. (Sept.)
close
Details