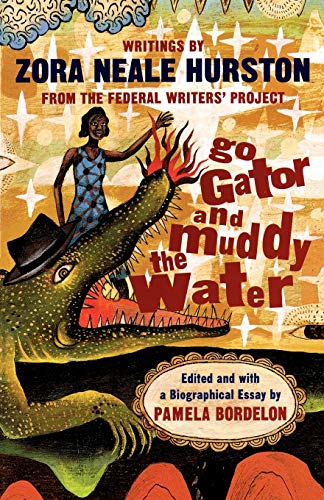 Go Gator and Muddy the Water: Writings by Zora Neale Hurston from the Federal Writers' Project

The writings of distinguished African-American Harlem Renaissance author, folklorist, playwright and anthropologist Hurston during her tenure (1938-39) in the Florida division of the Federal Writers Project, many of them previously unpublished, are collected here. They are augmented by Bordelon's biographical essay about Hurston's life during the year she participated in the project, and by her analysis and commentary. The FWP, a federally funded relief program that provided impoverished writers with employment, offered Hurston the lowliest position of ""relief reporter,"" a title for which she was clearly overqualified. But Hurston, just three generations away from slavery, was accustomed to discrimination in a South where Jim Crow laws were still staunchly upheld. As a reporter for the FWP she was assigned to write 1500 words per week describing the lore of African-American Floridians, as part of a larger project, which was never realized and which, moreover, deleted most of Hurston's contributions from the manuscript-in-progress. Other work she submitted for the FWP was often ignored or heavily edited; a few pieces were included in an automotive guidebook, Florida. Included here are Hurston's transcriptions of African-American oral history: traditions, habits, folklore, lyrics and dances; as well as photographs of Hurston and associates, and her performance pieces and essays. Her notable observations on race, writing, her hometown and the upward mobility of blacks in her time are now invaluable historical resources. For Hurston fans, especially scholars, this book will offer a fuller picture of the writer's lesser-known literary endeavors. (Feb.)
close
Details