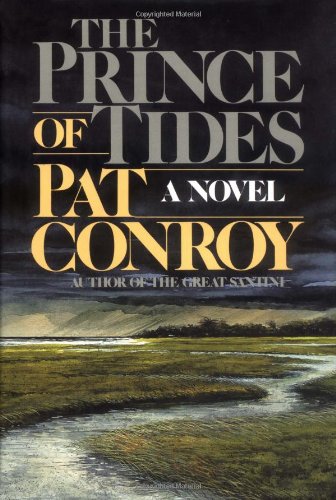 The Prince of Tides

For sheer storytelling finesse, Conroy will have few rivals this season. His fourth novel is a seductive narrative, told with bravado flourishes, portentous foreshadowing, sardonic humor and eloquent turns of phrase. Like The Great Santini, it is the story of a destructive family relationship wherein a violent father abuses his wife and children. Henry Wingo is a shrimper who fishes the seas off the South Carolina coast and regularly squanders what little money he amasses in farcical business schemes; his beautiful wife, Lila, is both his victim and a manipulative and guilt-inflicting mother. The story is narrated by one of the children, Tom Wingo, a former high school teacher and coach, now out of work after a nervous breakdown. Tom alternately recalls his growing-up years on isolated Melrose Island, then switches to the present in Manhattan, where his twin sister and renowned poet, Savannah, is recovering from a suicide attempt. One secret at the heart of this tale is the fate of their older brother Luke; we know he is dead, but the circumstances are slowly revealed. Also kept veiled is ""what happened on the island that day''a grisly scene of horror, rape and carnage that eventually explains much of the sorrow, pain and emotional alienation endured by the Wingo siblings. Conroy deftly manages a large cast of characters and a convoluted plot, although he dangerously undermines credibility through a device by which Tom tells the Wingo family saga to Savannah's psychiatrist. Some readers may find here a pale replica of Robert Penn Warren's powerful evocation of the Southern myth; others may see resemblances to John Irving's baroque imaginings. Most, however, will be swept along by Conroy's felicitous, often poetic prose, his ironic comments on the nature of man and society, his passion for the marshland country of the South and his skill with narrative. 250,000 first printing; $250,000 ad/promo; movie rights to United Artists; BOMC main selection; author tour. (October 21)
close
Details