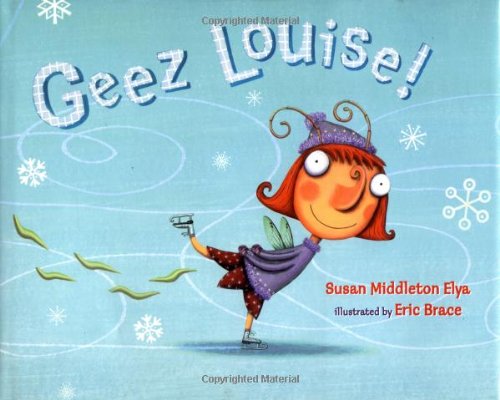 In this wishful story, an unpopular stinkbug named Louise competes against a nasty cockroach in, of all things, an ice-skating contest. Louise, who resembles a red-haired girl with a stinkbug's upturned nose and antennae, plays the plucky underdog who is avoided by her fellow insects: "Everyone scattered when she passed them./ She didn't mean to, but she gassed them." Bugs hold their noses when Louise does loops around the frozen birdbath that serves as a skating rink; Kiki the cockroach, a bloated blue meanie who terrorizes everyone, loves making fun of Louise's odor. At the urging of Termite Tara, her one true friend, Louise plans to beat Kiki at skating and prove herself to her peers: "If I could win, she thought, they'd see.../ There's more than stinkiness to me." Elya ( ) never allows the rhyme scheme or the optimism of this narrative to waver; Louise wins easily when Kiki falls during the competition, and the fickle bugs cheer that she is "cheeky./ You stood up to that bully Kiki!" Brace ( ) creates an assortment of bizarre but amiable insects with big heads, protruding eyes and noodly legs; he incorporates collage elements such as real dragonfly and butterfly wings plus dried leaves into his acrylic compositions. Yet despite the bouncy enthusiasm of the verse and pictures, the book offers no useful insights about playground politics. At most, this tale recommends that insecure students impress their peers by trouncing their cruelest detractors. Ages 4-8.