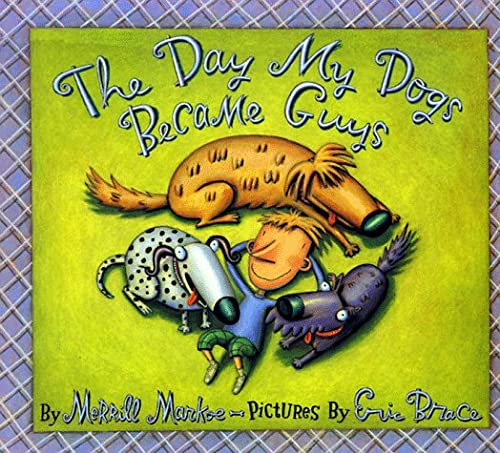 The Day My Dogs Became Guys

Markoe, an Emmy Award winner for her writing on Late Night with David Letterman, makes a very droll children's book debut. Carey, the protagonist, has three loyal but aggravating canines who drool at mealtimes and bark uselessly at squirrels. ""I wish they were people, so we could make them understand things once and for all,"" Carey tells his mother. That afternoon, a solar eclipse darkens the town, and Carey finds three unusual humans in place of his dogs--a transition that Brace (The Krazees) handily delivers with silhouettes that serve both their animal and human incarnations. Instead of the shaggy yellow mutt, Butch, there's a sloppy teenager; instead of the fat Dalmatian, Dee Dee, there's a plump, hyperactive lady in a spotted dress; and instead of the Scottish terrier, Ed, there's a balding older gentleman with a brushy black mustache and a plaid suit. After an affectionate hello, the three race for the kitchen. As Dee Dee raids the refrigerator, Ed leans out the window, yelling, ""Squirrels!... Scum! Creeps! Get out of that tree now,"" and a muddy Butch chases a car (""It's getting away!"") with Carey in hot pursuit. Markoe hilariously imagines the chaos that could arise from canine brains in human bodies. The dogs are earnest and sweet--Butch cowers at the words, ""Bad boy!""--but they're also easily distracted and desperate for a snack. In his artwork, Brace uses curving shapes and extreme angles to suggest antic motion, and conveys the characters' goofiness with froggy, wide-set eyes, sprawling bodies and lolling tongues. His scenes of the trio wreaking havoc on a quiet suburban street will have children of all ages rolling on the floor. Ages 3-8. (Feb.)
close
Details