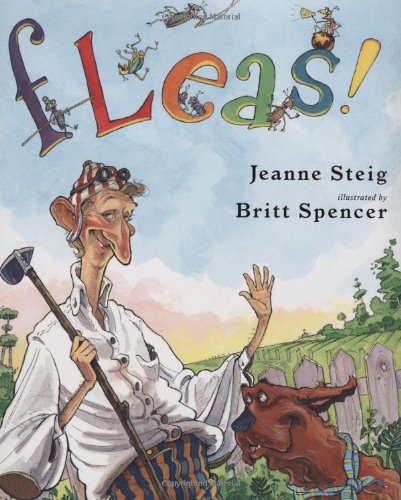 Steig's ( ) shaggy dog story, like the swapping stories found in folk or fairy tales, takes readers on a hilarious journey with a farmer named Quantz. “Patta pim, patta pum, the day has begun,” says Quantz. “Pitta pom, pitta posh—there's a dog in the squash!” Although the constantly changing nonsense expressions can seem intrusive, the story is pure fun: Quantz ingeniously trades the fleas which he gets from the dog for an uncle who never stops talking, the uncle for a huge Limburger cheese, and so on until he ends up with the now flea-free red dog at a flea circus frequented by all the characters who have gone before. In Spencer's ( ) capable hands, the intrepid hero looks like Ichabod Crane, and part of the joy is in seeing each new outlandish personage. Although the narrative tension stems from readers' attempts to anticipate just how Quantz will get rid of the next useless item—be it a red wig, a rabbit or a bare bone—the true magic emanates from Quantz himself, who looks for a “barrel of fun” and finds it. Ages 3–up.