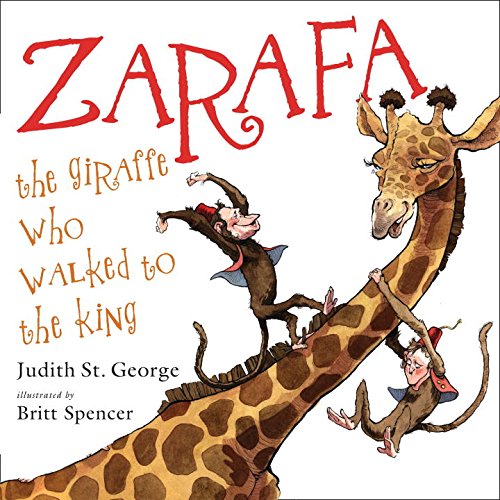 Zarafa: The Giraffe Who Walked to the King

This lively collaboration by the creators of highlights a unique historical episode, following a 19th-century giraffe, a gift from the viceroy of Egypt to Charles X, as she journeys from Africa to France. Fanciful flourishes fill Spencer's watercolor, gouache and ink art: after being captured in the wild, Zarafa perches on a camel as it carries her to a Sudanese village; she patiently tolerates costumed monkeys climbing on her neck while sailing down the Nile to Alexandria; and she pops her head through a freshly cut hole in the deck of the ship that brings her across the Mediterranean to France. There, over time, the affable animal finishes the trip on foot, accompanied by a pair of handlers, Hassan and Atir (as well as scientist Geoffrey Saint-Hillaire), cheered by admiring crowds along the way (“Hundreds—no, thousands—of visitors came to see Zarafa in the King's Garden.... Zarafa had been more that a gift to the king. She had also been a gift to the people of France”). St. George's breezy, conversational text (“Was she worn out? Not Zarafa!”) moves this voyage along briskly. Ages 6–8.