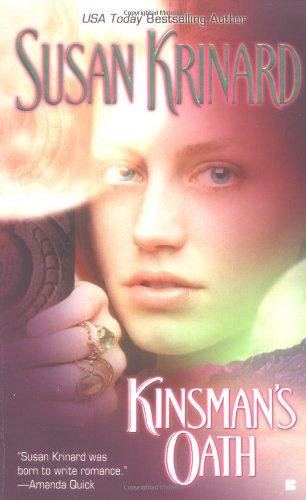 Two telepaths from very different backgrounds find love in Krinard's elaborate futuristic romance, which revisits the complex world she created in "Kinsman," her short story contribution to the (2001) anthology. Those who are familiar with this futuristic landscape may enjoy this imaginative tale, but others will likely feel one step behind from the first page. In the opening scene, young Ronan VelKalevi is captured by the beast-like Shaauri, a race reviled by humankind. As a grown man, Ronan finally escapes from the Shaauri with the help of Cynara D'Accorso, captain of the spaceship Pegasus. Ronan and Cynara are both misfits—he's distinctly human but he's been taught by the Shaauri to despise his own kind, and she's a strong woman who hails from a planet where women are second-class citizens. Cynara and Ronan prod each other's minds and connect in an erotic way, but it soon becomes apparent that Ronan has been programmed to kill a prominent human leader. The affair between Ronan and Cynara, while compelling, is too often overshadowed by the politics of Krinard's world. Overpopulated and overstuffed with exposition, this book isn't likely to achieve the popularity of the author's Wolf romances ( , etc.). .