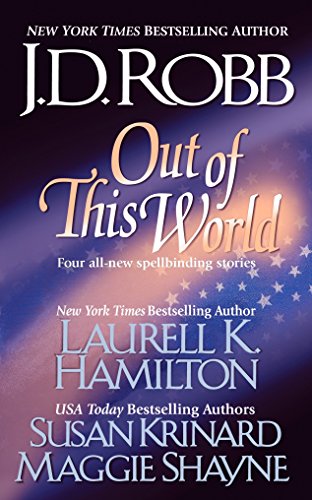 OUT OF THIS WORLD

Although this anthology features some of the most popular names in futuristic and paranormal romance, it reads more like a catalogue than a cohesive book. Robb's "Interlude in Death," featuring Lieutenant Eve Dallas, kicks off the collection and is the strongest of the four entries. The story's suspense is as well drawn as the romance, and readers won't have to be familiar with Robb's In Death series (, etc.) to enjoy this futuristic thriller. In contrast, "Kinsman," Krinard's () tale of two telepaths who try to prevent an interspecies war, falls victim to its own exposition and draws to a conclusion that is steamy but familiar. The remaining two stories are more traditionally paranormal. Shayne's "Immortality" features Puabi, a Dark Witch of Sumer who is reincarnated to right an ancient wrong, and Hamilton's "Magic Like Heat Across My Skin" finds Vampire Hunter Anita Blake in an S/M club with her two lovers, a Master Vampire and a werewolf king. As one might imagine of such a setting, the sensuality is dark and intense, but this will be no surprise to fans of Hamilton's Vampire Hunter novels (, etc.). Each of the works in this anthology is solid and should please current fans, but as a whole, the stories are only loosely connected and would have benefited from a stronger theme to tie them together.