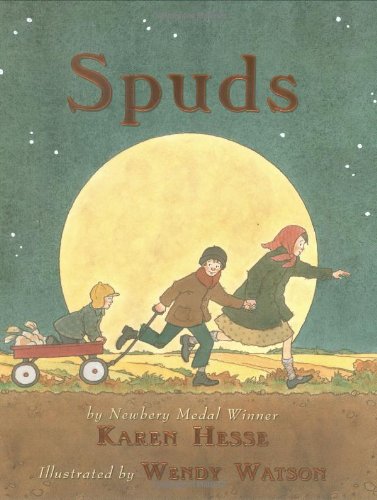 Not since or, perhaps, has poverty been quite so romantic as Hesse and Watson (previously paired with Hesse for ) make it seem in this nostalgic book, narrated by the middle of three fatherless children. As their ma leaves to work the night shift, the three sneak out to glean potatoes left on a neighbor’s field after the harvester has been through it. Hesse leans on readers to appreciate her use of language: “some high-beam car came flying ’round the bend” and the children dive down, “three tater-snatchers, flat-bellied in the dirt, till the tire buzz faded. Then, rising up in the moonlight, we commenced to cockadoodlin’, revelin’ in the pure pleasure of a close call.” Watson’s art roots this story pleasingly: inside their house, her characters look neat and flattened, the humble cousins of Kate Greenaway; the palette and props say Great Depression or earlier. The children’s illicit harvest carries with it a moral, of course, and the narrator eventually realizes that their mother’s love is so big that it “could turn even three little spuds like us into something mighty fine.” Together, the story and pictures create an appetite, then satisfy it. Ages 4–8.