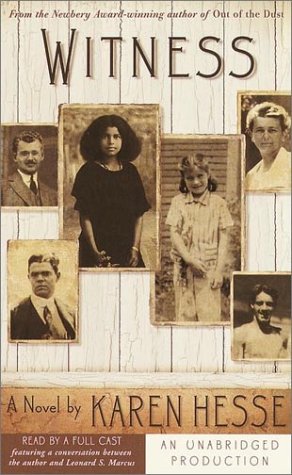 Hesse's () powerful, history-inspired novel about the Ku Klux Klan's encroachment on a small town in 1924 Vermont becomes a riveting audiobook as performed by a stellar cast. The story—told in poetry, in the voices of 11 characters—is surprisingly easy to follow; listeners are introduced to each distinctive character voice at the outset and are soon caught up in the strong narrative rhythm, able to discern who's who. Fine showings from Heather Alicia Simms () as Leonora Sutter, a 12-year-old African-American girl, and Jenna Lamia in the role of six-year-old Esther Hirsh, a Jewish immigrant child, anchor the proceedings and give this production its heart. Colorful supporting characters, some with evocative New England accents, subtly and effectively draw listeners into Hesse's thought-provoking themes. At program's end, listeners are treated to bonus material: a meaty interview with Hesse conducted by author and children's book historian Leonard S. Marcus. Hesse reveals, among other things, her inspiration for the book and her research methods. Ages 12-up.