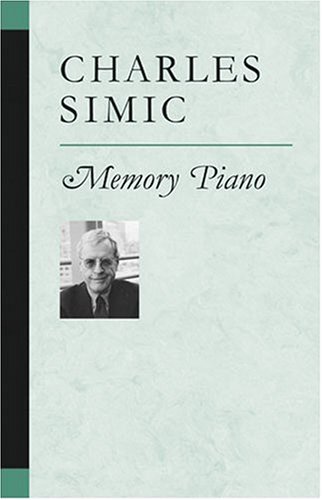 Though "memory piano" sounds like a phrase from Simic's own poetry, it comes from the title of one of the essay-reviews from the that form the bulk of this collection of mainly critical pieces on poetry in both America and the former eastern bloc. Simic's background as an immigrant from the former Yugoslavia and a Pulitzer Prize–winning poet puts him in a rare position to appreciate both the virtuosity of English-language poets such as Robinson Jeffers, W.S. Merwin and Donald Justice and the tragic exiles of Marina Tsvetaeva and W.G. Sebald. While Simic is an academic (professor of English at the University of New Hampshire), he sticks to the lesson he cites from the 's eclectic retrospective anthology: "keep the literary scholars out and stick to the original writing." Throughout, his biographic summaries smoothly shift to insightful, approachable literary characterizations and well-chosen excerpts from the books under consideration. Interspersed among these are briefer personal essays and memoir vignettes with idiosyncratic charm. Less original is an account of a Deep South trip just before George W. Bush's re-election, in which a feeling of disconnection from the religiously parochial Red States is palpable.