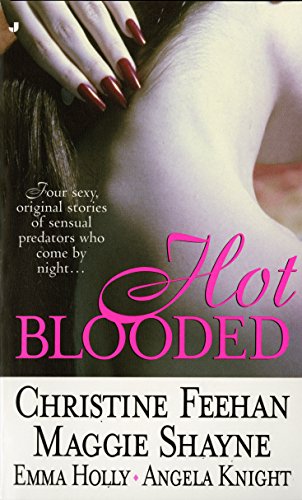 Four gorgeous nighttime predators bid farewell to bachelorhood in this uneven quartet of sensual paranormal romances. Surprisingly, Feehan's "Dark Hunger," depicting the romance between an immortal Carpathian and a spirited shape-shifter, is the weakest of the lot. Feehan struggles with the short form; she tries to cram everything she would normally put in a novel—multiple conflicts, a full cast of characters and an abundance of love scenes—into a mere 100 pages, and the result is a frenetic tale lacking emotional intensity, plausibility and focus. The stories improve progressively, however, with Shayne delivering a tightly wrought werewolf romance in "Awaiting Moonrise" and Holly offering a sexy, shockingly kinky romance ("The Night Owl") between a vampire and a smalltown baker. The most inventive of the four is "Seduction's Gift." Knight imagines a magical world where Magi, immortal champions of humankind commonly referred to as "witches" and "vampires," wield their powers to save humanity from itself. These immortal champions include the legendary King Arthur, Guinevere and the hero of this tale, Lord Lancelot du Lac, assassin and High Court seducer. All the stories suffer to some degree from an overabundance of lust and sex and a dearth of emotional connection, but fans of the genre aren't likely to mind.