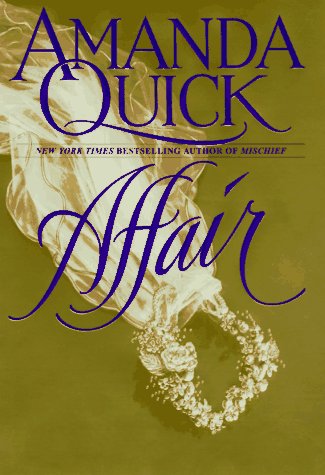 Engaging and sympathetic--although somewhat one-dimensional--heroines, and fast-paced plots propelled by a series of well-calculated revelations are the hallmarks of Quick's (aka Jayne Ann Krentz) bestselling novels. This latest suspenseful romance (after Mischief), set in Regency England, begins with an exciting prologue in which the heroine, plain but determined Charlotte Arkendale, faces down a would-be rapist with an empty pistol. When he asks her whether she ""believes in destiny,"" it is obvious that their paths will cross again. Five years later, Charlotte, now a 25-year-old virgin with her own investigation business, engages Baxter St. Ives as her man-of-affairs. She wants him to assist her in solving the murder of one of her clients, not knowing that Baxter has insinuated himself into this position in order to seek out the killer himself. Although he appears to others as ""bland as pudding,"" Charlotte sees ""a man of strong passions"" and is immensely atrracted to him. Baxter, who has concealed his background as a scientist and his identity as the bastard son of a wealthy earl, finds himself entranced by the spirited Charlotte. Meanwhile, Charlotte's sister, Ariel, makes her debut in society, where she meets Baxter's legitimate half-brother, Hamilton, fifth Earl of Esherton. They are all drawn into the search for the murderer, who instead entices them into his trap. The killer's destiny is determined by the old adage that character is fate, and by a bit of scientific sleight-of-hand. As always, Quick injects enough sexual innuendo to cause some heavy breathing and arranges for her reluctant heroine to recognize true love. (June) FYI: The paperback edition of Mischief, published in May, will contain a chapter from Affair.
close
Details