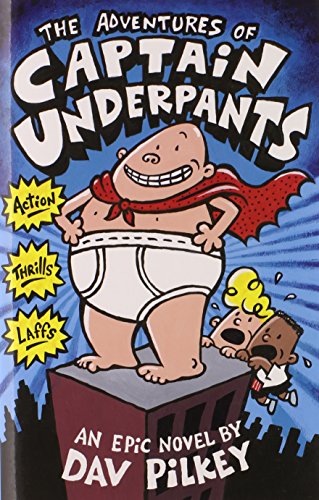 Few things command disrespect like the sight of a man wearing whitie-tighties. However, the bald and barefoot Captain Underpants happens to be a superhero. As one character notes, ""Most superheroes look like they're flying around in their underwear....Well, this guy actually is flying around in his underwear!"" The Captain, defender of ""Truth, Justice, and all that is Pre-Shrunk and Cottony,"" is the comic-book invention of two troublemaking fourth-graders, George and Harold. He comes to life after the boys use a mail-order device to hypnotize their diabolical school principal, who sheds his outergarments and battles crime in only a cape and Y-fronts. As his creators try to snap him out of the trance, Captain Underpants threatens bank robbers with ""Wedgie Power"" and foils the villainous Dr. Diaper ("" `You know,' said George, `up until now this story was almost believable' ""). Pilkey (Dog Breath) uses a sitcom-like formula to set up the rivalry between the boys and the principal, and to strip the authority figure of dignity. After a tepid exposition, he falls back on the notion that undies and mild bathroom humor are funny in themselves-- and, given his intended audience, he's probably right. Line drawings of the slapstick action appear on every page, and ""Flip-O-Rama"" climactic sequences create an agreeably corny ""motion-picture"" effect. But the lowbrow jokes (the Captain uses an elastic waistband to apprehend an evildoer) chiefly constitute this tale's harmless, non-gross appeal. Ages 8-12. (Sept.)
close
Details