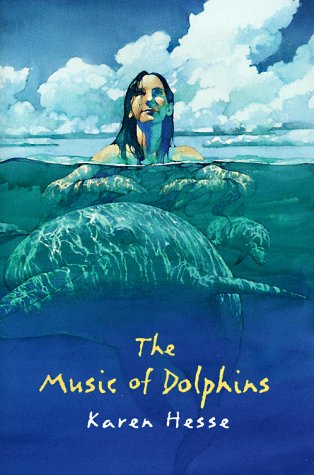 The Music of Dolphins

As moving as a sonnet, as eloquently structured as a bell curve, this book poignantly explores the most profound of themes--what it means to be human. The narrator, Mila, is discovered by the Coast Guard on a deserted island, where she has been living with dolphins. The so-called feral child becomes the subject of government study--pried at and poked, taught language and music. Her amazing progress contrasts with that of another ""wild child,"" Shay, who is being studied by the same team of experts. While Shay remains locked in silence, Mila's hands can fly over the computer keyboard or the holes of a recorder, and she even tries to explain dolphin language to the eager doctors who become her family. But Mila feels the call of the wild growing stronger and doubts about the sparkling lures of civilization growing louder. Finally the longing for her island consumes her entirely. It's a difficult plot to pull off, but Hesse (Letters from Rifka; Phoenix Rising) succeeds. While she insists on simplicity in framing the story, she also employs a high-wire writing technique, having Mila tell the story first in halting, little words (in big type), then in more complex, fluid words (in small type), so that the language and themes become increasingly sophisticated. All together, a frequently dazzling novel. Ages 9-12. (Sept.)
close
Details