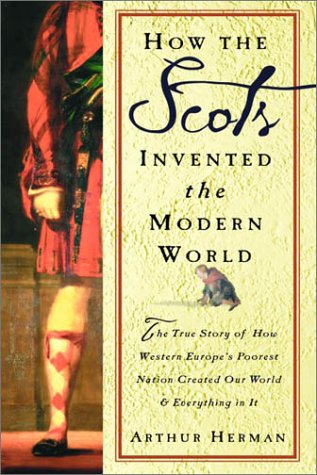 HOW THE SCOTS INVENTED THE MODERN WORLD: The True Story of How Western Europe's Poorest Nation Created Our World & Everything in It

Focusing on the 18th and 19th centuries, Herman (coordinator of the Western Heritage Program at the Smithsonian and an assistant professor of history at George Mason University) has written a successful exploration of Scotland's disproportionately large impact on the modern world's intellectual and industrial development. When Scotland ratified the 1707 Act of Union, it was an economic backwater. Union gave Scotland access to England's global marketplace, triggering an economic and cultural boom "transform[ing] Scotland... into a modern society, and open[ing] up a cultural and social revolution." Herman credits Scotland's sudden transformation to its system of education, especially its leading universities at Edinburgh and Glasgow. The 18th-century Scottish Enlightenment, embodied by such brilliant thinkers as Francis Hutcheson, Adam Smith and David Hume, paved the way for Scottish and, Herman argues, global modernity. Hutcheson, the father of the Scottish Enlightenment, championed political liberty and the right of popular rebellion against tyranny. Smith, in his monumental , advocated liberty in the sphere of commerce and the global economy. Hume developed philosophical concepts that directly influenced James Madison and thus the U.S. Constitution. Herman elucidates at length the ideas of the Scottish Enlightenment and their worldwide impact. In 19th-century Britain, the Scottish Enlightenment, as popularized by Dugald Stewart, became the basis of classical liberalism. At the University of Glasgow, James Watt perfected the crucial technology of the Industrial Revolution: the steam engine. The "democratic" Scottish system of education found a home in the developing U.S. This is a worthwhile book for the general reader, although much of the material has been covered better elsewhere, most recently in T.M. Devine's magisterial and Duncan A. Bruce's delightful .

How the Irish Saved Civilization