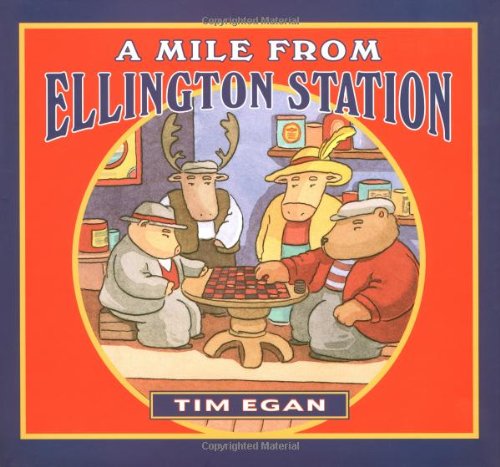 A MILE FROM ELLINGTON STATION

Egan specializes in quirky towns and dignified, faintly distrustful animal characters. His latest wry tale begins in Ellington Lodge, a general store with golden-brown woodwork, quaint posters advertising fresh produce and bountiful countertops stocked with jars. Ellington Lodge's proprietor, a bear named Preston, is enjoying a yearlong winning streak at checkers. He hunches over a checkerboard, observed by a leisurely pig, elk and cow—all neatly dressed in the hats and jackets of country gentlemen. "As Preston beat[s] Eleanor Dorsey in game nine hundred and fifty-six," a stranger enters the shop and offers to do some chores that Preston has neglected. The talented newcomer, a squat brown dog wearing a gray top hat, burgundy-red duster and powder-blue cape, whips up breakfast and teaches everyone how to say "hello" in 10 different languages. He also trounces the bear at his game, thus disrupting Preston's routine and provoking the insular townsfolk. Egan's matter-of-fact narration unwinds at an unhurried pace, and his deliberate lines and mellow watercolor palette likewise suggest stasis. It's no wonder the eccentric visitor (who rides a unicycle and carries a walking stick with a certain ) first poses a threat, then turns out to be "just a small dog with an attitude." This understated tale, with its aura of mystery and its subtle mockery of prejudices, recalls past Egan successes such as and . Ages 4-8.