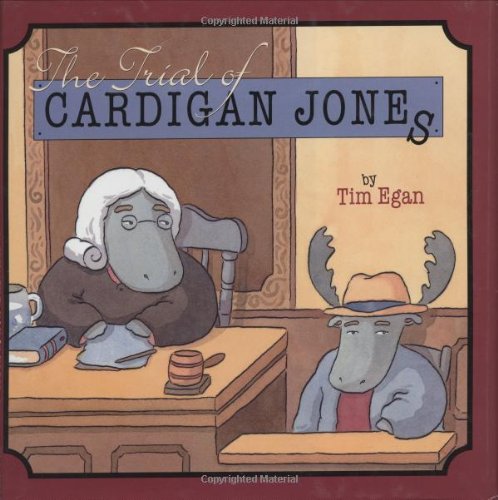 THE TRIAL OF CARDIGAN JONES

Egan's ( ) eponymous hero, a sweater-wearing moose, is new in town. After he stops to smell an apple pie on Mrs. Brown's window sill, he finds himself accused of theft when it goes missing. Cardigan proclaims his innocence, but "noticing that he had pie crust on his shirt, [the police] arrested him." The suspect is hauled before a judge, subjected to the confident assertions of witnesses ("That moose right there," says a rabbit neighbor of Mrs. Brown, pointing at the appalled Cardigan, "He stole it"), and pretty much convicted on the spot ("He's a troublemaker," says a gopher, even before Cardigan takes the stand). Egan plays the proceedings with a characteristically straight face. His deadpan prose plus his tight, almost claustrophobic framings and grim-faced accusers add up to a taut courtroom drama. He plants clues to the mystery's solution, and the sage judge, picking up on them, suspects where the real blame lay. ("Everyone immediately felt terrible for being so rotten to Cardigan," Egan notes.) Grown-ups may detect a spoof at work, but youngsters should find much food for thought in the story's message about the importance of presumed innocence. Ages 4-8.