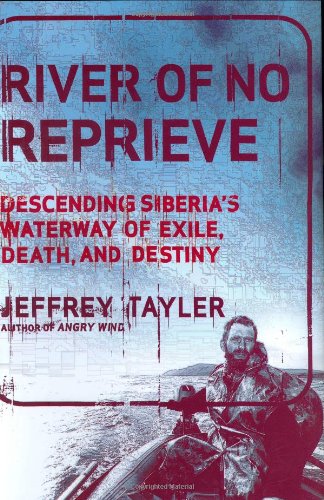 River of No Reprieve

In his fifth book, Tayler returns to the Siberian hinterlands of Russia, the country where he has lived for the past 11 years and of which he wrote in . This time, however, he struggles 2,400 miles up the Lena River in an inflatable raft with his guide (and bane) Vadim, an ill-tempered veteran of the Soviet-Afghan war. Tayler follows the likely route that the Cossacks—who embody "the best and worst" of the Russian spirit—took in the 16th century, when they annexed much of Siberia for Ivan the Terrible. It was a hard trip then; it is a hard trip now.

Tayler, a freakish polyglot who speaks eight languages, is unique among contemporary travel writers. Despite his fondness for death-prowled lands, he rarely complains and never falls prey to self-aggrandizement. The Lena River, however, very nearly undoes him. After a pleasant spell, the temperature drops, bad weather rolls in and soon Tayler is gagging on clouds of mosquitoes and shooing wasplike horseflies—all of which is grippingly described. "In more than two decades of travel," he writes, "I had never... hit this nadir of gloom." Along the way, he and Vadim come ashore to find devastated villages, teenagers dancing away in surreal Arctic discotheques, Soviet irredentists flying the hammer and sickle, drunken Russians and aboriginal people, Baptist missionaries, Yakut shamans (one of whom has his own Web site) and, in what is perhaps the book's most moving interlude, some of the last of Siberia's Volga Germans.

The many incidental pleasures of this harrowing if sometimes repetitive book are chiefly literary and sociological. Tayler is good at describing the summer Siberian sky ("a glowing canopy of lavender"), and his thoughts on Russian president Vladimir Putin, who is adored by the very people for whom he provides the least, offers the American reader some borscht for thought about the appeal of their own benighted leader. About halfway through, the book catches fire when Tayler's patience ruptures beneath Vadim's shower of abuse. Movingly, Tayler and Vadim neither become friends nor grow to "understand" each other.

This is a book about survival, and Tayler's observations are as bracing, and sometimes shocking, as a lungful of Arctic air: "Had any other people on earth," he writes of the Russians, "done so much to destroy itself?" Tayler's Siberia is unremittingly depressing, and the book concludes with little hope for its people or its culture. As a sympathetic but clear-eyed portrait of an unhappy but beautiful land, will be a difficult book to surpass.

Chasing the Sea God Lives in St. Petersburg The Father of All Things