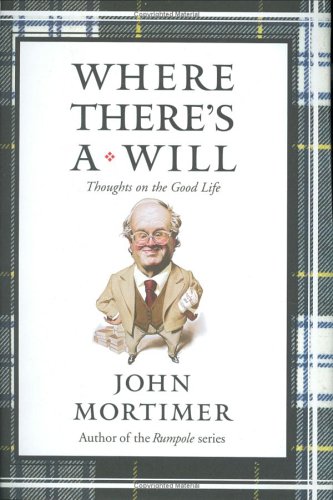 WHERE THERE'S A WILL: Thoughts on the Good Life

Best known as the creator of Horace Rumpole ( , etc.), Mortimer delivers much sound advice and liberal opinion, supported by apt literary allusions (from Shakespeare to Wodehouse) and by amusing anecdotes drawn from his dual career as a barrister and an author. In this intimate, extended monologue, the 81-year-old Mortimer holds forth in 32 brief chapters on a wide range of subjects dear to his heart, including such foolish New Labour policies as banning outdoor sex ("I should include in my will a strong recommendation of the joys of alfresco sex"); the excesses of political correctness ("A state in which everyone tiptoed around whispering for fear of hurting somebody's feelings would be dull beyond human endurance"); the virtues of the young ("Children can spot pomposity, insincerity and self-regard a mile off and are the best possible antidote to such diseases"); and the value of vulgarity ("If you can find a streak of vulgarity in yourself, nurture it"). As the punning title suggests, this conversational memoir amounts to an informal last will and testament, but the author ends on an uplifting note as he surveys his children and grandchildren. Mortimer fans and all lovers of civilized prose will share his delight.