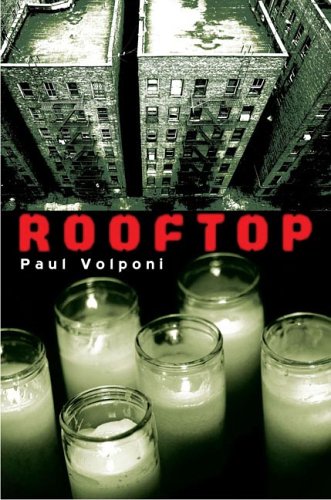 After 17-year-old Clay's parents catch him smoking pot, they pull him from Long Island City High School and enroll him at a day treatment facility, where he gets counseling for addiction while working towards a GED. Five months into the program, Clay's estranged 18-year-old cousin, Addison, shows up. The two instantly reconnect as buddies, but Addison doesn't share his cousin's commitment to staying clean, nor does he intend to give up his job-dealing on corners. The talky (and rather plodding) first half of the novel, narrated by Clay, doesn't prepare readers for the pivotal moment in the story, in which a rookie white cop shoots Addison dead on the rooftop of the title. At this point, the novel veers into painful but overly familiar territory, as Clay, the only witness, gets co-opted by a charismatic mayoral wanna-be and pressured into shaping his account of what happened to make it seem worse than it was, in order to serve the mayor hopeful's race-baiting political agenda. While readers may find this a disappointing follow-up to Volponi's debut, Black and White, the author nonetheless demonstrates again his accessible narrative style, replete with street slang. The book will likely have no trouble finding an audience among teens, given the raw discussion material it provides on hot-button topics such as drugs, race, poverty, violence and doing the right thing. Ages 12-up.
close
Details