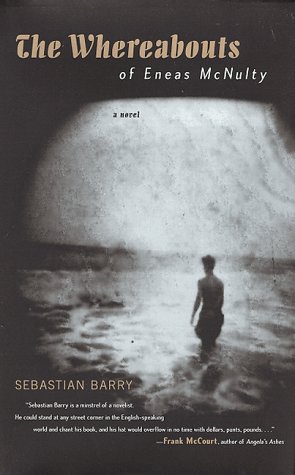 The Whereabouts of Eneas McNulty: 1

Known in England as a playwright (The Steward of Christendom), novelist and poet, Barry brings all the attendant skills to this stunning novel, with its evergreen theme of the parallels between a personal life and the political life of a country--in this case the fiery history of 20th century Ireland. Eneas McNulty is born in 1900 in Sligo, the eldest child of a dancing mother and a musician father. By the age of 10, he has forged a magnetic bond with his chum Jonno Lynch, an orphan and Eneas's lifelong opposite. WWI is the pivotal event in Eneas's life; he loses his footing and never regains it. Driven by a vague dream of fighting in French fields, he enlists in the British Merchant Navy and finds himself in Galveston, Tex., hauling machine parts. He returns home to find postwar Ireland in political turmoil and economic dire straits. Jonno, who has devoted himself to the ""world of shillings and employment,"" won't acknowledge Eneas because of his connection to the British. After a jobless year, he signs up with the Royal Irish Constabulary, which cements the community's conviction that he's a British loyalist. To take his name off the ""black list,"" Jonno and his crowd demand that Eneas become an assassin against the RIC. While Eneas doesn't fear his own death, he can't kill anyone else. And so his permanent exile begins. He works as a herring fisherman in the North Atlantic, joins the British army for WWII, digs a canal in Nigeria, opens a hotel for homeless veterans in London's Isle of Dogs. Eneas is in many ways an Everyman in this century of the migrant and the dispossessed, but Barry is careful to intersperse flashes of humor as well as moments of bone-deep longing in his protagonist's bleak odyssey. Work and the rare moments of fellow-feeling it produces are Eneas's solace as even his memories of home are salted with the menace of the men who've vowed to hunt him down. Barry's lyric prose, astute use of detail and poignant insight are a fit match for his tragic theme of an innocent buffeted by history. (Aug.)
close
Details