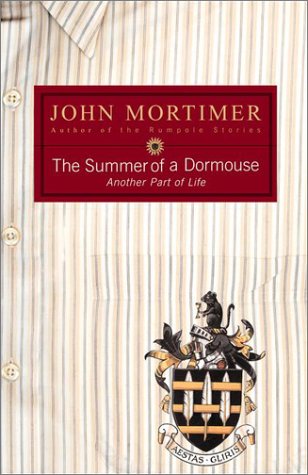 THE SUMMER OF A DORMOUSE: Another Part of Life.

Mortimer, a retired barrister and creator of Rumpole, retains his high good humor in this third charming autobiographical volume (whose title comes from Byron's ), even if, as he confesses at the start, he's reached an age when he can no longer put on his socks. ("The situation is, in minor ways, humiliating and comical.") A superb raconteur, the author never forgets that his first duty is to entertain. In a series of short, conversational chapters, which proceed in an artfully haphazard way to cover recent experiences (such as selecting a coat of arms) as well as childhood memories (mainly of his blind father, a judge), he recounts one amusing anecdote after another. These can be racy, as in the priceless transcript of a lurid sex case tried with straight face before the very proper House of Lords. More serious concerns such as prison reform are also in evidence. Mortimer chronicles his involvement in various good causes, from saving London's Royal Court Theatre to finding a suitable statue to top a vacant plinth in Trafalgar Square. A visit to his dying first wife, Penelope, is especially poignant. Travel—filmmaking with Franco Zeffirelli in Italy, dealing with panhandlers in New York—also receives his humane and humorous attention. By the end, Mortimer makes it clear that, despite his infirmities, he has not lost his zest for life. This is a most civilized and witty book by a most civilized and witty man.