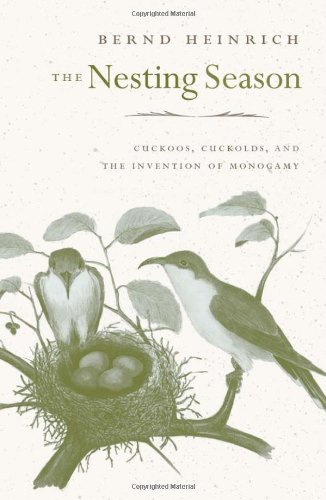 The Nesting Season: Cuckoos, Cuckolds, and the Invention of Monogamy

Blending scientific research with memoir, Heinrich ( ) reveals the complex courtship and mating rituals of birds—along with the startling commonalities between certain human and avian domestic arrangements. Since research suggests that similar hormonal activity precedes both human and nonhuman mating, he also argues for applying so-called “anthropomorphic” labels like “love” to the behavior of birds. How else can one describe the tribulations that emperor penguins undergo to hatch their lone egg and raise their young? Heinrich also explores how some birds use plumage to attract mates while others use dance, elaborate nests, etc., to attract females, all an attempt to maximize the chances of passing on their genes; the ingenious strategies they use to protect their eggs; how the size of the clutch of eggs depends on whether the species is monogamous with the male helping feed the mother and the young (more babies) or not; and how males who leave the nest, or “cheat,” risk being cuckolded themselves. Skillfully narrated and illustrated by the author's own photographs and watercolor sketches, this book offers a range of intellectual and aesthetic pleasures.