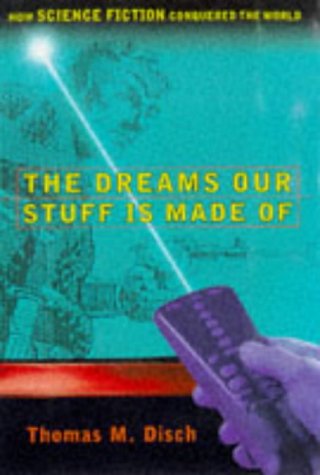 The Dreams Our Stuff is Made of: How Science Fiction Conquered the World

With pungency and wit, Disch (The Castle of Indolence) explores the enormous cultural impact that SF has had over the past century, placing it in the tradition of tall tales and lying, arguing that SF ""has a special claim to be our national literature, as the art form best adapted to telling the lies we like to hear and to pretend we believe."" He argues for Edgar Allan Poe as the father of SF and devotes a chapter to what he calls ""our embarrassing ancestor,"" whose many stories anticipate themes common in later SF. Space travel, nuclear holocausts, Star Trek, drugs, sex and feminism, religion, politics, imperialism in space, and race relations are among the topics Disch trenchantly investigates in stories by many of the field's best-known figures, past and present. Their admirers are likely to be uncomfortable or enraged by some of his comments, which reflect a thorough knowledge of SF both as an insider and an outsider (Disch largely ceased writing SF two decades ago) and of the wider world in which it developed. His concluding chapter, ""The Future of an Illusion--SF Beyond the Year 2000,"" offers a bleak perspective. More than half the top 10 grossing films of all time have been SF, but the economics of filmmaking dictate action-adventure and dumb plots, contends Disch. Similarly, the economics of book publishing favor undemanding series. Retailers should encourage SF buffs to buy this provocative account but should also encourage them to supplement it with two valuable companions: Brian Aldiss's Trillion Year Spree (1986) and Edward James's Science Fiction in the Twentieth Century (1996). (May)
close
Details