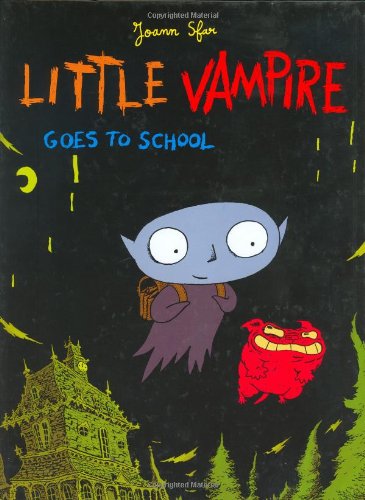 This glossy paper-over-board comic takes a mordant approach to the school story. The titular gentle gray-faced lad haunts a mansion along with many nasty ghouls and one memorable sidekick, a sardonic bright-red bulldog. He longs to go to school with other children, and his glamorous, purple-haired mother gives permission—"if you promise you'll be back before dawn." Little Vampire soon discerns that school happens "in broad daylight," so he settles for doing homework for a lazy boy. He also writes notes to the boy, Michael, breaking the rules of the spirit world and angering a skull-faced Flying Dutchman called the Captain of the Dead. After an ordinary set-up, unpredictability reigns. The Captain is kind despite his horrific appearance (he wears a human mask "so I don't frighten the little boy too much"), and Michael is an unshockable Jewish agnostic with a matter-of-fact attitude toward death. When Little Vampire says his parents are "the living dead," Michael replies, "Mine are the dead dead; that's why I'm an orphan." Michael reappears in the more macabre (, due in September), in which he wants to kill a school bully but learns self-defense instead. Readers of European series like Tintin will recognize Sfar's baroque illustration style and dense plotting, which recommends itself to an experienced audience. The young characters are multifaceted and often funny, and they embrace the weird, gory humor of horror comics. Ages 10-up.