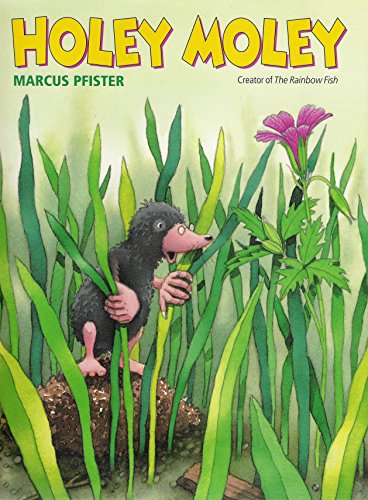 From the creator of the Rainbow Fish books comes another fable, this time about two mole brothers. Tim tends to do what comes naturally; his idea of fun is to dig a deep hole. Matt is the rebel; he yearns to build a hill to "see over the tall grass and find out what else there is out there in the world." Naturally, the two squabble, and stalk off in opposite directions to pursue their own thing, only to sheepishly discover that they had both accomplished the thing: "By digging a hole, Tim had tossed up a pile of dirt, making a small hill. By building up a hill, Matt had had to dig up dirt, leaving a small hole." Unfortunately, Matt and Tim don't exude much personality (not until several pages in will readers know who's who), and the consistently straight-on perspective grows a bit wearisome. Surprisingly, the moralistic wrap-up proves to be the book's biggest plus. Considerably less preachy than the lessons parceled out to Rainbow Fish, the ending arises authentically out of the comedy inherent in a familiar domestic rivalry. Even more importantly, it exhibits a playful sense of logic—readers will likely chuckle when they realize, along with the brothers, that a hole and a hill require pretty much the same effort. Ages 4-up.