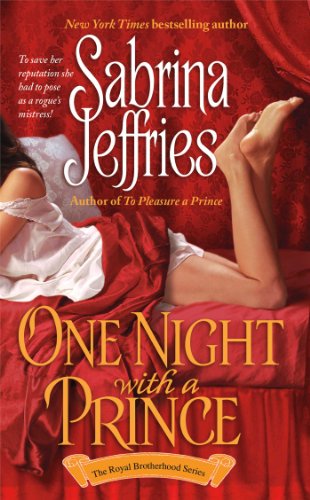 ONE NIGHT WITH A PRINCE

In Jeffries's engaging third entry in her Royal Brotherhood series about three fictional illegitimate sons of England's Prince Regent, impoverished widow Christabel, the Marchioness of Haversham, must recover a set of letters that could send her father to the gallows and bring scandal on the prince. To do so, the spirited but naïve young woman needs the aid of an unregenerate rake, men's club owner Gavin Byrne. Though he stands to gain a title if he helps Christabel secure an invitation to a gambling house party where the letters may be found, Gavin is primarily motivated by his grudge against the princely father who rejected him and blackened his mother's name. Thrown into conflict from the start by their divergent goals and world views, the two find themselves irresistibly drawn to each other, which makes for some steamy love scenes. Fortunately, Jeffries ( ; ) not only beguiles readers with scenes of passion and vivid characters but steadily builds the story's tension to an exciting conclusion. The details of gambling, mistresses and scandalous conduct further enrich the tapestry against which this emotionally satisfying story plays out. Jeffries's readers will be royally pleased.