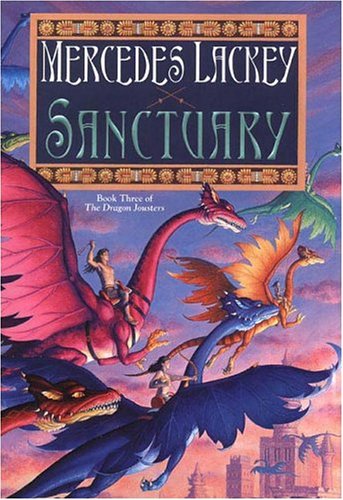 In Lackey's well-crafted third Dragon Jousters book (after 2004's ), wing-leader Kiron, the former serf known as Vetch, and a disparate group of refugees from the countries of Alta and Tia flee to the desert, to a hidden refuge that the gods have uncovered and named Sanctuary. In Sanctuary, Kiron and a small cadre of Jousters are safe from the evil Magi, who are draining Alta and Tia of their "gifted ones." Kiron and the Jousters with their magnificent dragons, who have as much personality as the human characters, must learn to co-exist in a land of extremes. Kiron discovers that it might be possible to deal with some of the freed dragons of Tia who have gone wild. Even though Sanctuary may be concealed from the diabolical Magi, no one living there can forget their presence. Once again, Kiron and friends must face their fear and brave danger to help save Alta from the Magi's depravity. Spot-on dialogue and just the right amount of exposition mark this rip-roaring adventure as superior fantasy fare.