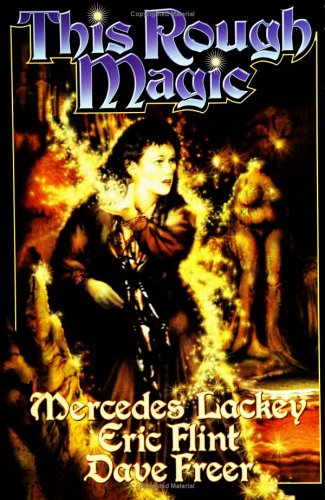 Lusciously set in alternative-history 16th-century Venice, Corfu and sinister points northeast, this huge sequel to the authors' equally massive and magnetic will appeal to adolescents of all ages. In this world, broken off from ours in A.D. 349 (when St. Hypatia saved the Alexandrian Library), Christian magic battles blackest sorcery, with a wild card—the old, old Mother Goddess still worshipped in Corfu's mountain caves—eventually entering the fray. On the human front, young Benito Valdosta, a roistering rascal and irresistible scamp, derring-dos into modern-man maturity, even snatching Maria, his early love, from the arms of Death himself. The convincing characters range from stalwart Vinland Vikings and conniving courtiers to sex-crazed jealous wives and a fatally shape-shifting shaman, not to mention sadistic King Emeric of Hungary and Emeric's lethal great-great-aunt Elizabeth, Countess Bartholdy, who's bathed into eternal youth by gallons of virgins' blood. All express themselves in stripped-down modern American idiom and whirl through breathless action, making for hours of old-fashioned reading fun. Who needs depth, when Lackey, Flint and Freer, as mixmasters of nearly every heard-of myth, hurtle through as compelling a romp as this? (