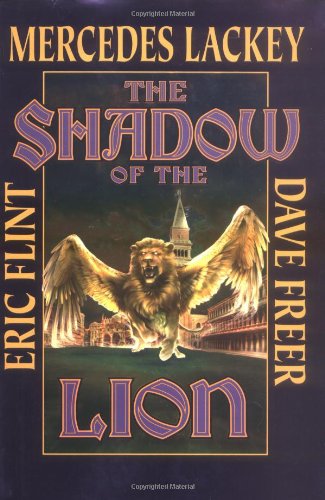 THE SHADOW OF THE LION

The prolific Lackey (the Bardic Voices series, the Urban Faerie series, etc.) and cohorts Flint () and Freer () whip up a luscious bouillabaisse of politics, intrigue, love and black magic set in an "Other-worldly, New-Age Venice." Like the actual 16th-century city-state, the authors' Venice of the 1530s is a dangerous place, filled with as many illicit love affairs as murders. Garbage and occasional dead bodies float in the stinking canals. The city is also a target for would-be foreign conquerors: the Vatican, the Holy Roman Empire, the Grand Duchy of Lithuania and Poland, and the small city-state of Ferrara, ruled by Enrico Dell'este, who surreptitiously watches his grandsons, Marco and Benito, the story's water-rat heroes. Around Benito, a thief, and Marco, a canal doctor, swirl a host of characters, major and minor: the men and women who ply the gondolas and rafts; the spy Caesare Aldanto, the boys' supporter; plus courtesans, whores, monks, priests, knights, shamans, undines and the demon Chernobog. Meanwhile, the winged lion of St. Mark's, symbol of Venice, is stirring, and its shadow falls on Marco as the city's future ruler. The authors' use of contemporary American vernacular—"get real," "fat chance," etc.—instead of pompous period speech keeps the pages turning fast, but the last-minute stampede of fantastic monsters that abruptly resolves the story's various conflicts makes for a clunky climax. In a book this fat the glossary at the end is essential.