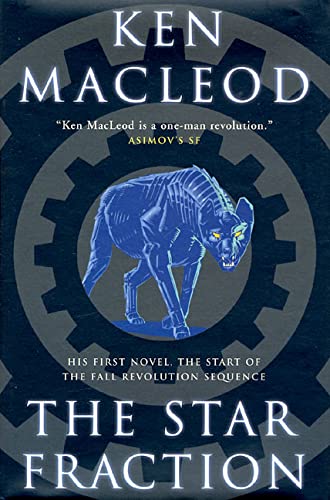 First published in Britain in 1995 and the start of a new series, this fine SF political thriller explores the fascinating possibilities of a future world (2040s London) in which traditional Labour Party leftist policies have contributed to the country's ruin. Never mind that this vision may be a bit dated in the wake of Tony Blair's New Labour victory of 1997. Marxist security mercenary Moh Kohn and computer expert Janis Taine, later joined by "femininist" terrorist Catherin Duvalier and Jordan Brown, a teenage refugee from an evangelical commune, seek to defeat a sinister artificial intelligence that threatens to act as a doomsday machine. With a host of peculiar friends and enemies and just as many action scenes in odd places (try a gay ghetto whose militia is known as the Rough Traders), this quartet will keep readers interested if occasionally confused right through the last battle against the Hanoverians (the absentee royal family) and the Men in Black (the U.S./U.N. technology police, or Stasis). The political scenario needs (and receives) a good deal of background explanation, allowing American readers in particular to better appreciate such curious political entities as the Space and Freedom Party and the Felix Dzerzhinsky Workers' Defense Collective. In general, MacLeod () is more adept at world building than at narrative, but he also possesses the rare talent of attracting readers who won't necessarily agree with the political agenda implicit in his fiction. This novel promises well for the rest of the series.