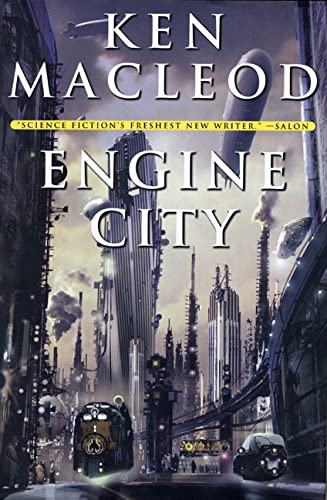 The final book in MacLeod's Engines of Light trilogy (; ) starts a bit slowly, its plotline divided among several different planets, but soon gathers steam. The Second Sphere, a volume of human-occupied interstellar space far from Earth, was established millennia ago by highly advanced aliens for largely inscrutable reasons and has been the home of several different human species, not to mention sentient dinosaurs and giant squid (aka krakens), ever since. Indeed, humanity has had to adjust to being the bottom species on the totem pole, since the saurs and krakens are technologically more sophisticated than us and control all interstellar travel. Even more overwhelming are the space-dwelling intelligences known only as the Gods. Now, however, a group of renegade cosmonauts with their own improvised starship has upset the balance of this complex society. In addition, the Multipliers, an alien race who've been interfering in the lives of Earth's species since prehistoric times, have returned to human space, offering a peculiar form of immortality and challenging the Gods for control. MacLeod () includes several of his trademark political debates and these are as engaging as always. The Multipliers, eight-legged creatures whose appendages subdivide to the point where they can manipulate matter on the atomic level, are fascinating and very alien indeed. The novel doesn't stand well on its own, but should please fans of the series as well as readers who appreciate hard SF with a political bent. ()