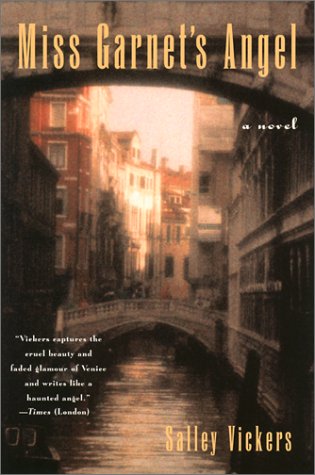 Guardian angels have attained such trendy status in American popular fiction that it's refreshing to read Vickers, a writer from across the Atlantic, whose subtle depiction of a life touched by a heavenly spirit carries not a hint of cliche. Her debut novel is an unpretentious gem of a book that charts the late coming-of-age of Miss Julia Garnet, a retired English school teacher who spends six months in Venice after her lifelong companion, Harriet, dies. Venice has a magical effect on reserved Julia: a dyed-in-the-wool Communist, she relaxes in her antipathy toward religion, and even begins to visit the local church. There, she becomes enamored of a series of paintings that tells the story of the Apocryphal book of Tobit, a tale that mixes elements of Judaism with the religion of Zoroaster. In the story , young Tobias travels to Medea, part of the Persian Empire, to collect a debt for his father, blind Tobit. He is accompanied on his journey by a hired guide who turns out to be the Angel Raphael. As Julia learns more about Tobias's trek, she embarks upon a soul-altering journey of her own. She falls in love with an art dealer, Carlo, and befriends Sarah and Toby, twins working on the restoration of a Venetian chapel. When Toby disappears suddenly, after discovering a priceless Renaissance painting, Julia finds out that neither Carlo nor the twins are exactly what they seem-but the Angel Raphael's watchful spirit will help good prevail. (Feb.) Forecast: This touching novel, a sleeper hit in Britain, should win American fans eager for a treatment of religious themes without the gooey sentiment that often accompanies the topic of angels.
close
Details