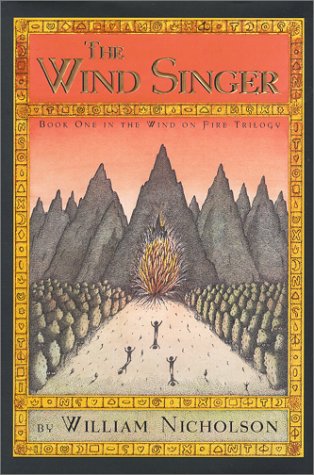 The Wind on Fire Trilogy Book One, the: Wind Singer

Nicholson's (Shadowlands) highly imaginative debut YA novel, the first in a planned trilogy, starts out tantalizingly but eventually neglects its internal logic. In the dystopian city of Aramanth, family ratings determine position, housing and privileges within the society's color-coded caste system. As the novel opens, the Hath family brings two-year-old Pinpin for her first day of ""testing""--with comically disastrous results. Shortly after, Kestrel, the Haths' strong-headed and brave daughter, stages a rebellion in a riotously depicted scene at school and eventually ends up climbing the wind singer (a giant archaic structure whose history is nearly forgotten) to hurl curses at the town. Events escalate, and soon Kestrel, her twin brother (who has supernatural abilities to empathize with others) and a learning-disabled classmate, Mumpo, find themselves on a quest to retrieve the wind singer's voice; according to legend, it will restore harmony to Aramanth. Nicholson is at his best when he adheres to Kestrel's point of view; occasional shifts in perspective may temporarily break readers from the author's spell. Highly original characters, such as the loving ""Mudpeople"" who inhabit a world under the city's grid-like streets, and ""old children"" whose touch zaps the life from normal humans, exert a powerful fascination. However, there are inconsistencies (Why, when Mumpo turns into one of the ""old children,"" is he exempt from the laws that govern them?) and unexplored elements (e.g., Kestrel's mother's ancestry and gifts as a prophetess). Perhaps these curiosities will be explained in subsequent installments, but they come across here as loose ends. Final artwork not seen by PW. Ages 10-14. (Aug.)
close
Details