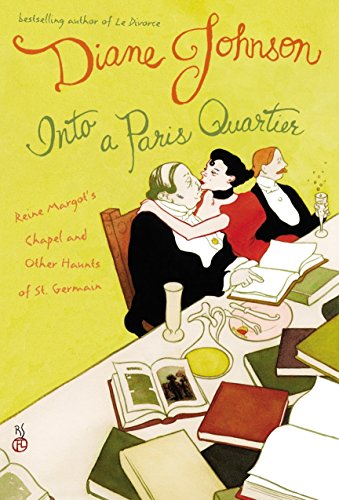 INTO A PARIS QUARTER: Reine Margot's Chapel and Other Haunts of St.-Germain

The Paris Left Bank neighborhood of St.-Germain is most often connected to the era from the 1940s through the '60s, when Sartre, de Beauvoir and others gathered in its cafes to discuss existentialism and listen to jazz; and the district has also long been associated with American expatriates from Thomas Jefferson to Ernest Hemingway. Johnson, who's written about Americans in France in and other novels, continues that tradition, living there six months out of the year, in an apartment that looks out onto a 400-year-old chapel built by Queen Margot, first wife of Henry IV. She offers a fractured yet often fascinating walking tour of sorts, explaining, for example, that Place St.-Germain-des-Prés is "cobbled with largish stones, terrible to walk on in high heels"; and that 5, rue Bonaparte has been home to Napoleon's sister, Pauline Borghese, to painter Edouard Manet and to Pierre Bergé, founder of Yves Saint Laurent. She's enthralled with the story of , explaining how Dumas's immortal characters were once living people who may have conducted their sword fights on the very spot where she walks daily. This admittedly subjective guide to Paris is at once a quick lesson in history from the 16th through the late 20th centuries as well as an insightful look at the mind of a novelist and her inspiration. Map.