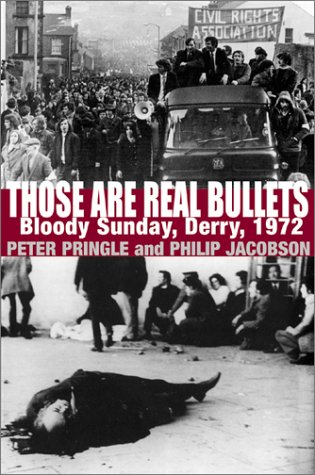 In the Irish Republic, January 30, 1972, is known as ""Bloody Sunday,"" the day when 13 unarmed Catholic marchers were killed and another 14 wounded as, Pringle and Jacobson say, ""part of a deliberate plan, conceived at the highest level of military command and sanctioned by the British government."" An official investigation conducted immediately after the incident excused the army for its actions. A generation later, Tony Blair reopened the investigation, making all previously classified archives available to the investigators. Pringle and Jacobson, veteran journalists of the British Sunday Times who have covered the story from the beginning, offer the most complete retelling of the events that led up to that awful day and the horror that ensued. In the late 1960s under the SDLP party led by John Hume--who would win a Nobel Peace Prize in 1998 for his work on the Northern Ireland peace process--Catholics adopted the tactics of Dr. Martin Luther King Jr. and picketed for civil rights. These marches were met with force by the British, and internment was introduced under the Special Powers Act, which, in turn, swelled recruitment in the outlawed IRA. By 1972, the situation was at the breaking point. Maj.-Gen. Robert Ford, commander of land forces for Northern Ireland, was under tremendous pressure from the Protestant majority and London to restore law and order. Although he was advised that the January 30 march was to be peaceful, he prepared for confrontation with both the IRA and its rock-throwing youngsters. The result was slaughter. Disturbing, raw and compassionate, Pringle and Jacobson's account is mesmerizing. 8 pages of b&w photos not seen by PW. (Jan.) Forecast: This book has a ready audience among Irish-Americans. It could also sell to other readers interested in human rights around the world, peaceful protest and the often violent response it evokes from those in power.
close
Details