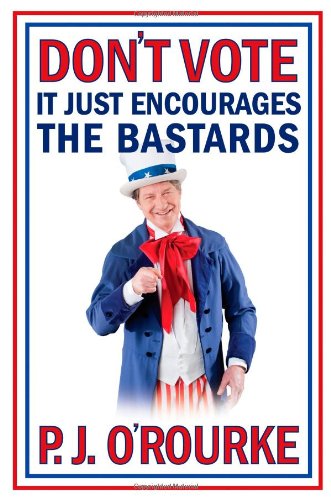 O'Rourke (On the Wealth of Nations) continues his libertarian attack of current politics. The author, an early editor at National Lampoon, takes on weighty topics like the Bill of Rights, climate change, health care reform, government bailouts, and foreign policy. When he wants to be serious, he quotes from John Locke and Thomas Hobbes; when he wants to be humorous, he brings up Joe Biden and Harry Reid. Republicans get a free ride mostly; if the subject is accumulation of power, Nancy Pelosi tops Dick Cheney. O'Rourke admits he's not a deep thinker, which is why when it comes to stem-cell research, he simply accepts that the dogma of his Catholicism clashes with scientific claims. But without further investigation, he embraces former president Bush's opposition to the research and lambastes president Obama ("damn wrong") for overturning the ban. When all else fails, use a dictionary definition, and O'Rourke breaks out his Webster's more than once. He works hard to lard his arguments with humor, but like much partisan work, these essays are best appreciated by those who already believe. (Sept.)
close
Details