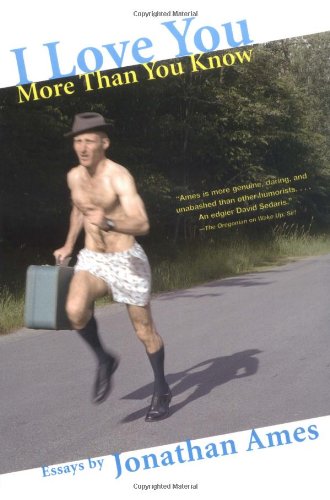 I Love You More Than You Know

Novelist and humorist Ames writes: "My whole oeuvre has become one big dysfunctional personal ad," and this uneven collection of essays often feels that way. Ames ( ) informs readers several times of his height/weight vital stats. He is straight, but with a pansexual horniness that leads to inopportune erections, sordid encounters with prostitutes and an s&m session with a dominatrix and her transsexual boyfriend that makes him late for a play date with his son. He forthrightly, indeed obsessively, discloses details of his chronic rectal itch, his "explosive episodes of Irritable Bowel Syndrome" and every other gross bodily eruption and excretion that plagues him. And there's a note of self-deprecatory preening as Ames marvels at the young lovelies he still manages to attract and the other celebrity writers he hangs with on his book tours. Sometimes Ames's trademark combination of (literal) bathroom gags, hipster grotesquerie and neurotic free association achieves an inspired synthesis of confessional humor, but with overuse its hilarity and freshness decays into a lazy reliance on shock effects and embarrassment laughs. When Ames manages to wrench his gaze from his navel (and other orifices) and connect with outside reality, his prose sparkles with offhand comic insights. Photos.