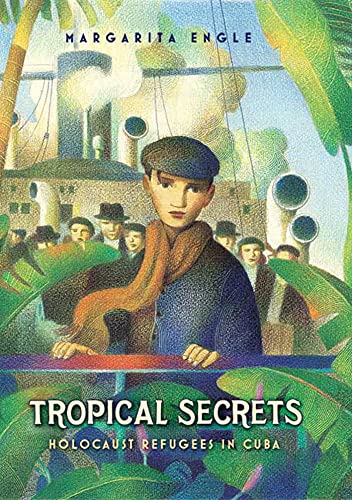 Newbery Honor–author Engle ( ) again mines Cuban history for her third novel in verse, this time focusing on Jewish refugees who sought asylum from the Nazis in Havana. Covering the period from 1939 to 1942, first-person poems alternate among 13-year-old Paloma, whose father is a corrupt Cuban bureaucrat; David, a Russian immigrant; and Daniel, whom readers meet aboard a ship in Havana harbor. Daniel, also 13, is alone: “My parents are musicians—/ poor people, not rich./ They had only enough money/ for one ticket to flee Germany.” The boy's isolation anchors the story emotionally. Daniel is befriended by Paloma, who feels guilt over her father's acceptance of bribes for visas, and mentored by David, who warns Daniel that he must tame “three giants”—the heat, the language and loneliness. Worries about German spies among the refugees suddenly makes the “J” label on Daniel's passport a coveted symbol, as only non-Jewish Germans are arrested. Engle gracefully packs a lot of information into a spare and elegant narrative that will make this historical moment accessible to a wide range of readers. Ages 12–up.